Here is the latest list. Looks like it's going to be an all AM tourney since no pros have signed up yet. Everyone else, let me know if you are coming.

The weather is going to be nice, so no excuses (or whining).

Posted by Killer B Disc Golf Shop at 7:41 AM No comments: Links to this post

We won't have any lunch vendor on site for the ICO, so please bring your own lunch on Sat.

There are two sub shops nearby, but since we want to have a short lunch break and keep things running fast, we'd appreciate it if you stayed close by.

Weather is looking warm and sunny in the low 40s. Too bad -- I was hoping for some really cold stuff!
Posted by Killer B Disc Golf Shop at 7:45 AM No comments: Links to this post

Free memberships to all Ice Cubers

Disc Golf U has signed on as a sponsor of the Ice Cube Open and is giving all participants a free 6-month membership to their score-tracking and handicapping website. They are also sending us a bunch of scorecards.

They are backed by Innova and it looks pretty cool. Course owners can use the site to set up leagues and track players' scores. Handicaps are automatically computed after a certain number of rounds.

I thought I'd try it out if we start an actual league this Spring and make it more enticing for newer players to come, since with handicaps anyone has a chance to win.

You can also enter scores for your own casual rounds and I think it automatically downloads your scores if you play in a PDGA event. So, we'll see how it goes.

Wait until after the ICO to sign up because you'll get some special promo code, I think.
Posted by Killer B Disc Golf Shop at 8:01 PM 1 comment: Links to this post

Thank you Steve Dakai of Choice Pools in Oxford, MA for donating some new discs to use as CTP prizes at our Ice Cube Ice Bowl this Saturday!

Steve also donated two boxes of used discs that we will be donating to schools and camps around Devens. Everyone should by a pool from Steve!
Posted by Killer B Disc Golf Shop at 7:32 PM No comments: Links to this post

We had two new faces this morning for a snowy round of doubles: Mr. Flatrock himself, Sean Franchi, and Pat from Harvard. Thanks for coming out, guys. 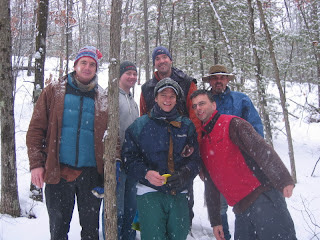 Although it was pretty nice playing while it was snowing, we lost at least three discs this morning. Pat and Donnie both nailed a couple of great flick putts/approaches from at least 60 ft. Nice! 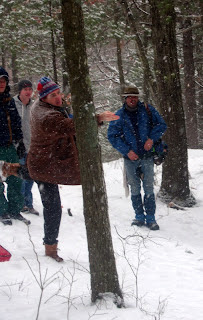 Posted by Killer B Disc Golf Shop at 3:06 PM No comments: Links to this post

Here's a peek at what you're playing for next Saturday. 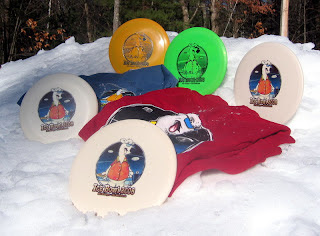 Besides a cash payout, first and second winners in each division will have their choice of a disc or long-sleeve shirt. Well, actually, the first place winner will have the choice -- second place will get the other of the two! 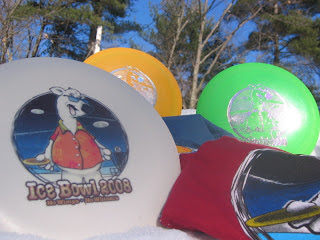 So far no Pros have signed up, so the Wraith and shirt may turn into CTP prizes. I don't understand why very few non-locals have signed up. Maybe NEFAland has commitment issues! :)

So come on golfers! Join us for a day of fun and help out some hungry people while you're at it! I want to blow away the Devens Loaves and Fishes with our generosity! 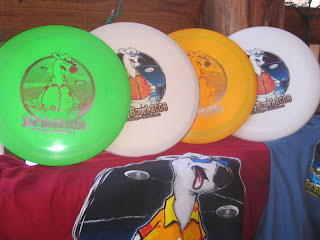 Six humans and one dog braved the chilly temps Sunday morning for a pretty competitive and tiring Social. Joining us regulars (Dave, Donnie, newbie Mike, and me) were Mike and Scott Connell. Nice to see you guys out here again! 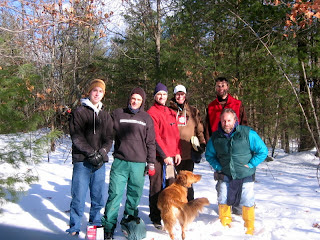 Dave and I held off a late push by Mike C and Donnie to win by two with a 50. Even though Scott and Mike brought up the rear, Mike showed why he is destined to become Devens' first teen disc golf wonderboy. The kid's got skills, money!

Although it was 22-degrees, sunny, and breezy, it wasn't that bad. Hiking through the snow definitely helped keep us warm.

Hopefully we'll see even more people out there next Sunday in preparation for the Ice Cube Open. Please let me know if you are going to play in the ICO. So far we've raised $100 for our charity! 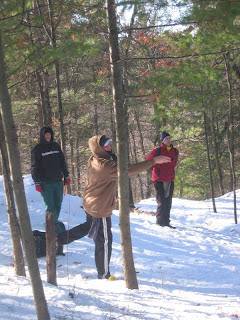 Fresh from a heavy downpour, Scott gives it a go on 2. 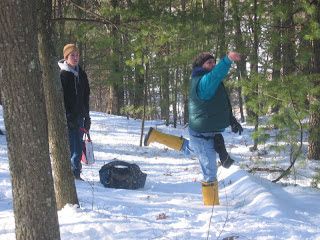 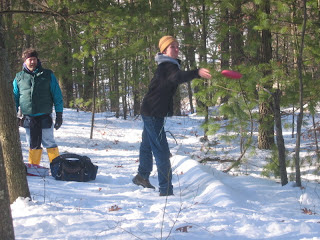 Donnie stares down his disc on 3. Can you see it? 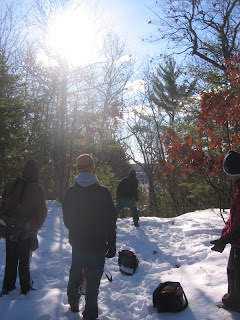 Donnie goes up and over 4 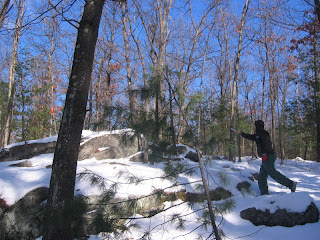 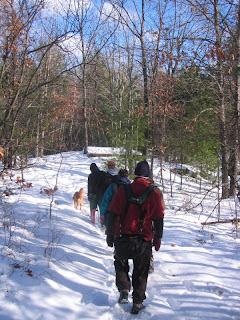 18 holes in the snow is tough, even if you have four legs! 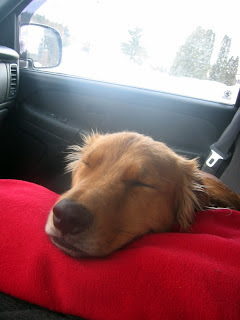 Posted by Killer B Disc Golf Shop at 8:42 AM No comments: Links to this post 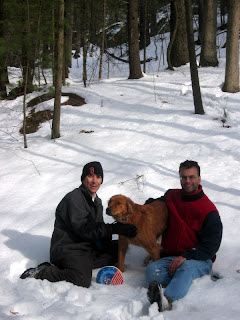 Brian, my dog Smokey, and I hit the Hill this morning for 11 holes. It was beautiful out there, the snow was crusty, and we had a good time. Hole 16 wasn't bad at all, so all you worrywarts have nothing to fear.

If we don't get anymore snow this week, the course should play pretty well for the Ice Cube Open in two weeks.

Disc Golf Donnie, Joe, and I plan on being there tomorrow for the Social at 9:30. Join us for a pre-ICO round!


Brian gets ready on hole 3 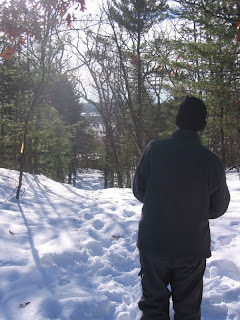 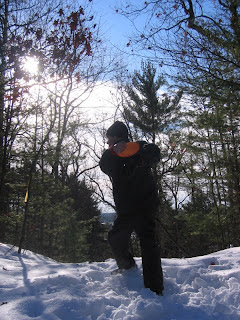 Peering around a tree for his approach 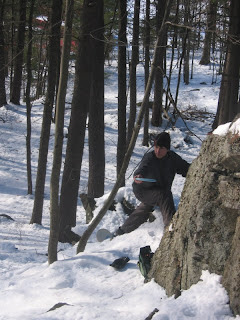 Both of us end up sitting pretty 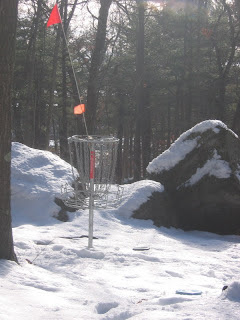 Smokey shows me what he thinks of my shot on 4 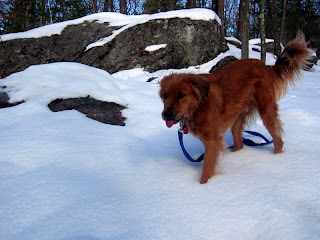 Brian finds himself behind another tree on 4 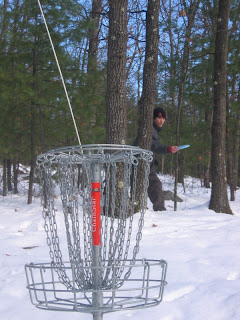 Clank! Off the top! 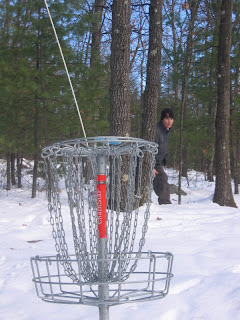 He has better luck on 9 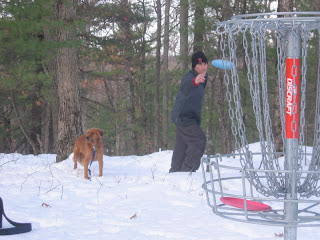 Posted by Killer B Disc Golf Shop at 2:23 PM No comments: Links to this post

Come brave the cold and snow and play in our first charity Ice Bowl! Help raise money and food for the Devens Loaves and Fishes! (More about Ice Bowls)

Devens Ice Cube Open
This will be a fun, relaxed tourney the day before the Super Bowl.

Name, division, and check payable to:

See you on the Hill!

Posted by Killer B Disc Golf Shop at 7:49 PM No comments: Links to this post

FOXBOROUGH, Mass. (AP) -- Patriots owner Robert Kraft sat behind his wide desk and marveled at how his team's jersey could be the target of so many boos -- even when it's worn by a 14-year-old girl.

This wasn't Randy Moss or Rodney Harrison hearing the catcalls. They're used to it. This was Anna Grant, a high school freshman who had worked hard to win the Punt, Pass & Kick competition in her age group as the team's representative.

When she was introduced along with the other winners before the fourth quarter of San Diego's playoff win last Sunday, she was the only one booed by the crowd in Indianapolis, home of New England's fiercest rival.

"Why should a champion be booed?" the boss of the three-time Super Bowl winners said Tuesday. "She won an intensive competition. She's supposed to be honored."

His team is getting the same reaction -- not because of the spying incident in the season opener but because fans like to see teams at the top get knocked off, he said. If the Chargers can't do it Sunday, New England will be headed to its fourth Super Bowl in seven seasons.

But first comes the coin flip before the AFC championship and Grant will be out on the field for that, invited by Kraft, who felt badly that she had been booed.
"What I decided is that we would honor her here before this game," Kraft said in an interview in his office filled with photos, footballs and other memorabilia. "We will recognize her as the winner on the field. Our fans will know."

Grant returned from school Tuesday and heard a phone message from Andre Tippett, the Patriots' executive director of community affairs and a former star linebacker.

She called back and was ecstatic when Tippett extended the invitation -- plus tickets for her, her parents and two brothers -- to take part.

Kraft knows the hoots were not directed at the high school freshman from Stratham, N.H., about 20 miles north of the Massachusetts border. It's just that the jersey provokes an instant response, usually a negative one.

Grant also understands, and even smiled when she heard the boos.

"Before I went down there, my friends said, `You know, you'll probably get booed,"' she said in a telephone interview. "I was kind of waiting for it.

"It really didn't bother me at all," she added. "People at the game came up to me afterward and said, `It's not you. It's your jersey."'

Posted by Killer B Disc Golf Shop at 7:07 PM No comments: Links to this post

Yahoo! We avoid the sweep!

Well, good news for the Hill yesterday -- we avoided our second-straight clean sweep! Yes, we lost to Buffumville 11-1, but we went down swinging at least.

In first round match play, I squeaked out an upset win over one of their top pros in a very competitive match that went 16 or 17 holes, I think. Andy, Justin, Scott, Luke, and Gags also put up a good fight and were pretty happy with how they played against some top-notch competition.

Round two was doubles and featured Andy and Scott in a 5-hole playoff against their opponents. Andy forced the OT by canning a super-long putt on 18. Nice!

Luke and I had dreams of an upset of our own but just ran out of holes in the end and lost by 2. Damn you and your 80-ft putts, Gary Cyr! :-)

Tully Lake is a pretty nice course and with a little tweaking could become a New England favorite. Next up, Maple Hill at home in February.
Posted by Killer B Disc Golf Shop at 7:51 PM No comments: Links to this post

The Hill takes on Buff this Sunday 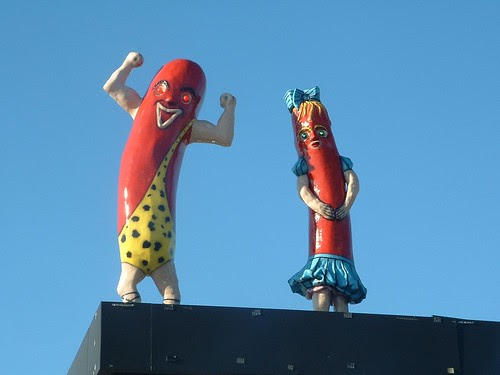 It's time for our monthly NEFA Team Challenge and this Sunday we play the stacked group from Buffumville out at the fairly new Tully Dam course in Royalston, MA.

We are huge underdogs once again since many Buff guys play Pro and our one Pro Master can't make it. Instead, we are showing up with two AM1s and four AM2, I think. No problem! :)

I'm not sure if any of us Hillfolk have played Tully yet, but according to some posts on the NEFA boards, some guys from Buff are going out on Sat. for a practice round. Great. Either they are nervous about playing us, or they just love playing disc golf. Me thinks it's the latter.

Feel free to show up for the Sunday Social, but just know that some of us regulars won't be there. Wish us luck!
Posted by Killer B Disc Golf Shop at 7:41 PM No comments: Links to this post 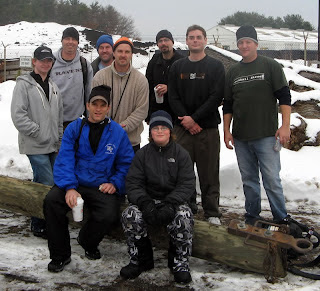 Arty has shared some photos from this past Sunday. Thanks bud! See them here. (You may need a Google account to view them)
Posted by Killer B Disc Golf Shop at 8:54 AM No comments: Links to this post

Congratulations to first-time Sunday Socialite, Zane "The Flick"' Atwood, who partnered up with his Dad to shoot a 54 and take first place yesterday.

The two also established the mixed course casual record, and put up a score to be beat by Zane's brother and Mom who also played along.

Thanks to all who came out for a great morning round!
Posted by Killer B Disc Golf Shop at 8:40 AM 3 comments: Links to this post

No, they aren't a law firm, just a handful of generous golfers that appreciate what we are doing up on the Hill. All together, they recently donated $80 to the course and $25 to our Ice Bowl charity. Thanks a lot guys!
If you can't make our Ice Bowl on Feb 2 but still want to contribute to our charity, feel free to send a check or a case of tomato soup to Devens Disc Golf, 40 Cranberry St Pepperell, MA 01463. Thanks!

And yes, mulligans will be for sale! ;-)
Posted by Killer B Disc Golf Shop at 7:58 AM No comments: Links to this post