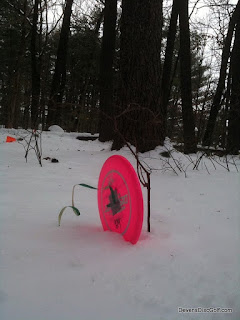 Today Dave James, Jimmy Blakeney, and I hit the Hill for some golf and teepad shoveling. The latest snowstorm only dumped about 6-8 inches or so on the course and conditions weren't too bad. It wasn't too slippery and the snow was just dense enough to hold most shots near or above the surface.

We played a combo of stroke and skins and had an overall good time. Both Jimmy and I were trying out some new and rarely-used discs and attached ribbon to the tops to help us find them in the snow. After an average front nine, Dave turned on the par train and ended up spanking Jimmy and me by four strokes. I somehow finished with one more skin than Dave to take home the big money. 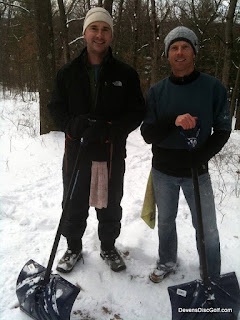 But the story of the day was the amazing 150-ft "putt" for a deuce Jimmy made on hole 3 in our playoff worth four skins. After a decent throw from the tee that just wanted to keep going, his disc finally hit a branch and dropped pretty much straight down on the road just beyond the log but before the pile of branches.

From there Jimmy had a tough chance at a 2, but only if he could get it through the slimmest of gaps, up the hill, around some trees, and into the bucket. After 20 tiring holes, I joked, "Just get it in and let's finish this."

Well, he did. He flicked it right through the gap, up the hill, and around the trees. It was awesome! I think this was the first deuce I've seen on hole three that wasn't during doubles. Crazy. 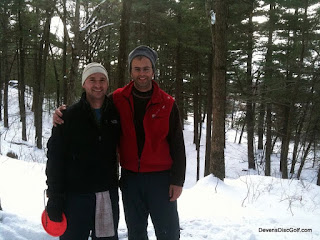 Don't forget to register for the Ice Cube Open!

Posted by Killer B Disc Golf Shop at 9:36 PM